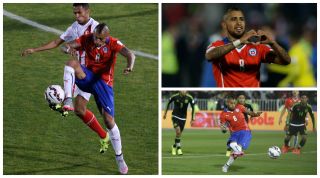 “The real Arturo Vidal is back,” declared a jubilant Tuttosport: “The €50m one.” Hours after going to press in celebration of the brace he scored in Chile’s 3-3 draw against Mexico on June 16, the Turin paper had to consider alternative headlines for the following day’s edition. The editor went with: “Now Vidal is... unsellable.” Not because his performances had been so good as to stiffen Juventus’s resolve to hold on to King Artù should big offers come in for him this summer; rather because now there might be none at all.

Involved in a car crash on a motorway 15 miles south of Santiago, Vidal’s written-off Ferrari 458 was the least of the damage. Alleged to have been over the drink-driving limit after an evening spent at a casino with his wife, he also had his reputation hit hard. A video taken at the scene understood to be of the player shouting at police: “You can put me in handcuffs, but know you’ll f**k Chile” only contributed to an even dimmer view of the whole affair, feeding into a perception of footballers as entitled and believing themselves to be untouchable.

La Gazzetta dello Sport defined it a ‘Crash Test’ for Chile and Juventus. His national team has been accused of moral expediency after deciding not to hold him to the standards included in the Federation’s code of conduct and exclude him – as they did in 2011 after Vidal and four other players turned up for training late and drunk ahead of a World Cup qualifier.

Apparently unprepared to let this incident compromise what is their best chance of lifting a trophy they have never won in all its 99-year history, it’s clear, like the Juventus motto, that to Chile “winning isn’t important – it’s the only thing that counts.” By not sending Vidal ‘home’ in disgrace, they also did Juventus something of a favour. He can make amends, redeem himself, even earn a measure of forgiveness by ending a country’s wait for the Copa America. His profile might return to the highest peaks, or even reach new ones. Because more than Alexis Sanchez, the symbol of this side is Vidal.

There are a couple of reasons why this would play out to Juventus’s benefit. They want the player to succeed, and with Chile back in the final for the first time in 28 years he has an opportunity to be successful at international level. Even if in the past he has returned late from his duties with Chile – like in October 2013, which led Antonio Conte to drop him for a game against Fiorentina – it might be said that Vidal has put his club before his country. In spring 2014 he delayed knee surgery until after Juventus’ participation in the Europa League ended in the semi-finals, putting his appearance at the World Cup in jeopardy. “By rehabbing so quickly I seriously risked hurting myself beyond repair,” he said.

There were even questions about whether Vidal would ever be the same player again. What followed was his most underwhelming season in Turin but it was understandable. There were flickers of the old Vidal but until March he seemed to be raging against his body and its inability to do what it had done before. Inconsistent, not least because he was also playing in a new position with a different remit, he still had big moments, delivering the coup de grace against Napoli at the San Paolo and sealing a fourth straight league title with the clinching goal against Sampdoria.

Even if a second successive summer tournament has denied Vidal an extended vacation, at least the Copa would give Vidal further continuity and the chance to play himself back into the form that made him the best box-to-box midfielder in the world, which of course is in Juventus’ medium-to-long-term interest as much as it is Chile’s in the immediate.

If the 28-year-old stays with the Old Lady – and his intention is to do so – next season will see him shoulder even more responsibility after the exits of Andrea Pirlo and Carlos Tevez. He is now a veteran. But let’s consider a scenario whereby Vidal wouldn’t be in Turin when the window closes at the end of August.

Why wouldn’t he be? Well, though neither are up for sale the impression has formed that if Juventus had to part with one of Paul Pogba or Arturo Vidal, the club would be more OK to lose the latter. There has at times been a sense of exasperation with Vidal. The car accident and alleged DUI were a shock but not a surprise. Last October Vidal was dropped for a top-of-the-table clash with Roma after it emerged he had been involved in a fracas outside the Loud nightclub in Turin in the early hours of the Friday before the game.

Too often this season, be it in the Champions League final or against Peru the other night, watching him has been nerve-wracking for his own supporters as he can look like a red card waiting to happen. Patience hasn’t been lost, but it has been tried, and there is a sense that while by no means superfluous, he has become less indispensable. If a bid were to be made for him, you’d think Juventus would be more inclined to listen than a year ago. Rather than “unsellable” as Tuttosport feared he had become, this run to a major final promises to restore what value he might have lost – just as it could relatively speaking for teammate Mauricio Isla, a player who Juventus are looking to cash in on this summer.

Vidal is 28 and unless they are fully confident that his best years aren’t yet behind him, then perhaps the time is right to consider a sale. Stefano Sturaro and new signing Sami Khedira mean there is cover of sorts.

Still, one imagines that the departures of Pirlo and Tevez this summer, which precipitated a revolution not of Juventus’s making with both leaving a year earlier than anticipated, will discourage the hierarchy from moving on another totem of this team. Vidal arrived the same pre-season as Pirlo and has been just as important to taking Juventus back to the top in Italy and in Europe. He remains very popular. The good still outweighs the bad and the ugly, but it’s telling that a debate is occuring.

It’s an intriguing one and the outcome of Saturday’s Copa America final between Chile and Argentina could render it even more so.