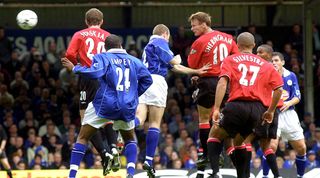 At the beginning of the 1961/62 season, no one knew much about Ipswich Town, nor their manager Alf Ramsey. Ipswich had won Division Two the previous season, but four years earlier they were playing in the Third Division South. This was Ipswich’s first year in the top flight and they were prime relegation candidates.

But Ramsey unleashed his wingless wonders, and with Ray Stephenson and Jimmy Ledbetter pushed back into midfield, the country’s best defenders were found wanting. Ray Crawford finished up the league’s joint-top goalscorer with 33. Ted Phillips netted 28, Ipswich won the league, Ramsey was named England manager and the rest, as they say, is history.

Newly promoted Derby, with their brash young manager Brian Clough, swanned into the First Division as if they owned it. They started, in August 1969, with a win against Everton, the eventual champions. Then they beat Southampton, Newcastle and demolished Spurs 5-0. After 10 games Derby were top. Just over a year before they’d been second bottom of the Second Division, facing relegation to the third. With Dave Mackay and Roy McFarland rock solid at the heart of their defence, Derby conceded only four goals in those opening matches. They couldn’t maintain championship form, though, and ended up in fourth, just above Liverpool and two places behind arch rivals Leeds.

Unfancied Sheffield United led the way at the start of the 1971/72 season. Newly promoted and with the likes of Tony Currie and Alan Woodward on top form, the Blades went through their first 10 games undefeated. They beat champions Arsenal 2-0 at Highbury, and Don Revie’s Leeds 3-0 at Bramall Lane. Sheffield United eventually lost top spot to Manchester United, after a 2-0 defeat at Old Trafford – the game where George Best scored his famous goal. The one that’s played over and over on TV. Where he ran around the entire Sheffield United defence. The Blades ended up 10th.

In 1974, Bill Shankly said that Carlisle United getting into the First Division was the greatest feat in the history of the game. It was Shankly’s final year in charge at Liverpool, but he’d begun both his playing and managerial career in Cumbria. Then, Carlisle proceeded to beat Chelsea, Middlesbrough and Tottenham, and after three matches they were top of the league. Two seasons earlier they’d avoided relegation to the Third Division by one point. Manager Alan Ashman had turned things around, with the help of Frank Clarke, Allan’s older brother, and Chris Balderstone, who would play cricket for England a year later. Carlisle couldn’t last the pace, though. They managed only another five wins all season and finished bottom. Ashman left to manage Workington Town.

September 1977 and two years after the Leeds United debacle, Ol’ Big Head was back in the First Division. Soon, though, the rest of the league realised they had more to worry about than Clough’s mouth. After nine games, Nottingham Forest were top. And after Clough bought Peter Shilton to play behind Kenny Burns, Larry Lloyd, Frank Clark and Viv Anderson, they stayed there. For the entire season. Opposition fans might have chanted ‘We hate Nottingham Forest’, but Clough cared only that Forest were champions. Six points clear, and only three defeats all season.

In 1992/93, the first ever Premier League season, Coventry went top under new manager Bobby Gould after beating Wimbledon, Middlesbrough and Tottenham in their first three games. They then lost at home to QPR and Blackburn, but wins against Sheffield Wednesday, Oldham and Spurs, again, saw them into second place. Coventry couldn’t maintain their impressive start to the season. They won only one of their next 11 games and slid down to ninth. Their form improved again in November, when Micky Quinn scored 10 goals in seven games. Sadly a run of one win in the next 11 meant Coventry needed the 3-3 draw they got against Leeds on the final day to avoid relegation. The Sky Blues finished 15th, three points above relegated Crystal Palace.

Remember that game when a 19-year-old Ritchie Humphreys collected a team-mate’s header inside the centre circle, ran to the edge of the Leicester penalty area before chipping it over two defenders and a hapless Kasey Keller? That goal took Sheffield Wednesday to the top of the 1996/97 Premier League after five games. Johan Cruyff, who’d seen Humphreys play on a pre-season tour, called him the next Van Basten. With David Hirst and Mark Bright out injured, Humphreys scored three goals in four games. Then manager David Pleat sold Chris Waddle, the lad’s mentor, to Falkirk. Humphreys didn’t score again all season. Wednesday finished seventh. Two years later Van Humphreys was playing for Scunthorpe.

Derby again. In 1998/99 they drew the first three games of the season and won the next three, which took them to second in the Premier League. Paolo Wanchope, Dean Sturridge and Francesco Baiano all scored during the Rams’ impressive start, but their success was based on a rock solid defence. With Russell Hoult in goal and Mart Poom on the bench, Rams manager Jim Smith could choose from Jacob Laursen, Horacio Carbonari, Spencer Prior, Stefan Schnoor and Igor Stimac, with Daryl Powell and Tony Dorigo as reserves. Derby were solid rather than spectacular for the rest of the season and ended up eighth.

At the end of August 2001, Sam Allardyce boasted that his newly promoted Bolton side could win the Premier League. Big Sam was only having a joke, but Bolton had just won their first three games, and were sitting proudly at the summit of English football. Their season started well with a 5-0 thrashing of Leicester, and wins against Liverpool (2-1) and Middlesbrough (1-0). After seven games Bolton were second, but things got more difficult as the season went on. They signed French World Cup winner Youri Djorkaeff in February, but still ended up 16th, only four points above the relegation places.

They've been here before. Under Martin O’Neill, Leicester won promotion to the Premier League, and then came ninth, 10th and eighth in the top flight. They also won two League Cups and played in the UEFA Cup twice. It was, therefore, a hard act for Peter Taylor to follow after O’Neill left for Celtic. Well not, actually. Well, not at first anyway. Taylor won four of his first eight games in charge, drawing the other three, and Leicester were top for the first time since 1963. Manchester United overtook them the very next game with a 3-0 win, but at Christmas, the Foxes were still third. They lost nine of their last 10 league games, though, and finished 13th. Another underdog, Ipswich Town, overtook them and finished fifth. Next season both teams were relegated. Taylor and Ipswich manager George Burley lost their jobs.

Ronald Koeman's Saints didn't actually get to top the Premier League last season, but after 11 games of last season they were the only side coming remotely close to runaway leaders Chelsea, who'd won nine of their matches and drawn the other two. Southampton suffered opening-day defeat to a Liverpool side who had nicked three of their stars that very summer, then drew against West Brom, but whipped themselves into shape to win eight of the next nine and soar 11 points above Brendan Rodgers' Reds. Included in that run was an 8-0 pummelling of Sunderland. But the good times faded. A run of four straight losses from November 30 to December 13 pushed them out of the top four, but their eight defeats in the last 15 games of the season culminated in a distant – if Europa League-clinching – seventh-place finish (10 points off the top four).