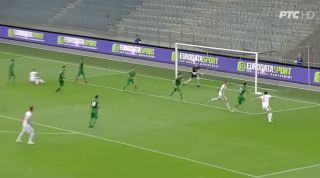 Serbia thrashed Bolivia 5-1 on Saturday evening in Graz, serving up a fine display ahead of their World Cup opener against Costa Rica on June 17.

Even though Newcastle's Aleksandar Mitrovic scored a hat-trick, the game will more likely be remembered for Ivanovic's volley in the 42nd minute – or, more specifically, the build-up that led to it.

The former Chelsea defender nodded a floated ball back across the box to Manchester United's Nemanja Matic, who chested the ball into the air for Adem Ljajic to tee up Mitrovic. Despite being full of confidence with two goals to his name at that point, his spectacular overhead kick was poorly mishit.

Fortunately for him, though, it didn't matter: the ball fell to Ivanovic, whose thunderous drive crashed into the top corner.