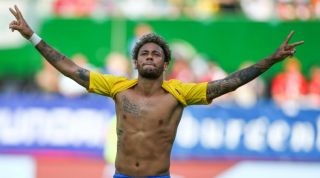 Brazil beat Austria 3-0 on Sunday afternoon, as the World Cup joint-favourites ramped up preparations for their Group E opener against Switzerland on June 17.

Manchester City's Gabriel Jesus opened the scoring in the 36th minute, but Neymar stamped his authority on the game just past the hour mark.

In the 63rd minute, the PSG forward left Aleksandar Dragovic on the floor before neatly sliding the ball through Heinz Lindner's legs.

After the game, Brazil boss Tite was full of praise for his 26-year-old captain.

"I don't know Neymar's limits," he told ESPN. "His technical and creative capacity is impressive. When we get him in the last third of the field he is lethal."

He said: "You have to trust, you dream. You can talk, you're Brazilian and you can dream; we're dreaming more and more. Dreaming is not forbidden."