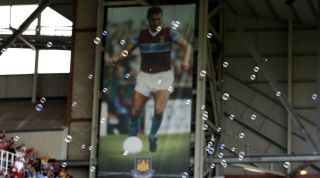 West Ham United supporter Dave Spence has admitted to friends and family that bubble-blowing, a hobby for most of his life, no longer holds the appeal it once did.

Spence began blowing bubbles as a schoolboy, and soon became a keen bubble-blower, enthusiastically blowing pretty bubbles in the air at the Boleyn Ground and beyond.

Even when not actively blowing bubbles, the Dagenham-born 40-year-old would publicly reaffirm his intention to form hollow spheres of iridescent soapy liquid and to propel them upward with the power of his lungs.

“West Ham had their ups and downs in the eighties and nineties, but I was more than happy to blow bubbles whatever the results on the pitch,” the season-ticket holder confided yesterday.

When questioned what it was precisely about blowing bubbles that left him cold, Spence referred to the sheer monotony of a lifetime spent dipping a looped plastic stick in detergent and putting one’s lips to said stick.

“After 40 years, I’ve realised that bubbles just aren’t that interesting,” he confessed. “If I was forever whittling animal shapes, or forever cooking delicious vegetarian pies, or forever watching Mad Men, then I might still be able to muster some enthusiasm.”

“As it is, bubbles just seem a bit pointless.”

Spence’s newfound ambivalence about blowing bubbles is likely to sow widespread disquiet. The football community has only recently recovered from the revelation that a significant proportion of Liverpool fans regularly walked alone, while recent research suggests various fans’ claims that their club is by far the greatest team the world has ever seen may be wildly overstated.