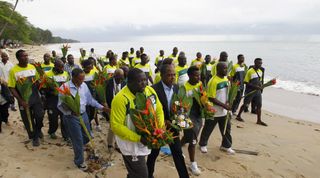 Together they walked slowly to the coastline, singing in unison. Once there, and despite the entourage, a gentle ocean breeze and the swish of waves kissing sand were the only sounds. A team, representing a nation, stood in silence.

Those present laid flowers. A few said prayers, many shed tears. The coach Herve Renard stood solemnly behind his players and observed, a mix of pride, sorrow and conviction in his eyes. Kalusha Bwalya, the country's greatest ever player, laid a wreath. Zambia united in grief and remembrance.

After staying in Equatorial Guinea for the entire Africa Cup of Nations to date there was only one way Zambia could return to the scene of one of the worst disasters in African football history - the 1993 air disaster that took the lives of 30 people including members of Zambia's greatest football team. As finalists. So they did, upsetting Ghana to win the semi-final 1-0 thanks to a goal from Emmanuel Mayuka. A return to Gabon, scene of that plane crash, was secured.

The team travelled to Libreville and first port of call was the Beach Sablire, site of the 1993 air disaster that cost 30 players, crew and officials their lives off the coast of Gabon on April 27, on their way to Dakar to play Senegal in a 1994 World Cup qualifier.

Nearly nineteen years have passed since the day when, two minutes after the De Havilland C5 Buffalo military aircraft took off carrying the sporting jewels of a football-mad nation, it exploded off the coast of West Africa into the Atlantic Ocean, killing all on board.

This was a team that had promised Zambia the world. A thrilling, vibrant, exciting group of players that stunned football only years earlier when, at the 1988 Olympic Games in Seoul, Zambia highlighted its astounding promise by thrashing Italy 4-0, the Chipolopolo announcing themselves on the global stage.

Zambia had designs on a first Africa Cup of Nations trophy and a place at their first World Cup. But the tragic events of 27th April 1993 robbed them of their goal, robbed wives of their husbands and mothers of their sons.

As he laid flowers and answered questions to the gathered media on the beach, Kalusha Bwalya's face portrayed a quiet dignity and a deep underlying pain. The undoubted star of Zambia's memorable team, only a twist of fate stopped him from being on that plane. Due to club commitments, the then PSV player had made his own arrangements to travel to Dakar from Eindhoven. He was just leaving his house when he was informed of the news.

Since that dark Spring day, Bwalya has dedicated his life to honouring his brothers, by attempting to complete the journey they began together nearly two decades ago. His anguish has taken him on a lifelong mission to lead Zambia to the pinnacle of African football - a place they once seemed destined for.

"In 1993, the Chipolopolo came here to fulfill a promise," he stated from the beach in Libreville. "They did not succeed, but instead gave up their lives for a gallant cause - the dream to bring glory to our country, mother Zambia."

"It is the same cause that brings us here today, the only difference is that we are alive and our former team mates are no longer here."

Since 1993 Bwalya's drive has been relentless. He led a decimated, patchwork Zambian team to the 1994 Cup of Nations final just months after the crash. He was there when the 1994 World Cup dream finally faded. He played into his 40s, trying desperately to help Zambia qualify for a World Cup. He coached the national team. Now, as president of the Zambian Football Association (FAZ), his project is one game away from fulfilment.

"It keeps us busy every day," Bwalya says. "We can't sleep. The generation that we lost, we have now found another generation that is probably ready to take over from where the fallen heroes passed away."

"It's not the same; I always think you can't replace a human being with another human being, but I think the boys have done us proud."

A date with destiny?

There is a reconnect between the 1993 team and the class of 2012, led by Renard and guided by Bwalya, that makes Zambia's unlikely path to their third Cup of Nations final, in Libreville, a truly extraordinary story.

It is a sentiment that Renard touched on after Zambia beat overwhelming favourites Ghana: the feeling that, above and beyond a story of unlikely sporting success, this is a tale of destiny.

"There's something written that we have to go to play to honour the memories of the Zambia national team that died in 1993," the Frenchman stated. One should not overlook what an emotional, heartwarming story this really is.

Renard has played a big part in Zambia's route to Libreville. You could see evidence of a promising team under his guidance in 2010 in Angola. There, the Chipolopolo were unfortunate to lose in the quarter finals to Nigeria on penalties, having shown glimpses of a developing side.

This tournament has proved that promise and for that Renard deserves great credit. In football, a coach's role is not only to choose players and devise tactics. He also sets the emotional tone of the team.

Renard has done this magnificently. In his crisply pressed white shirts he cajoles from the touchline, arms waving frantically to keep Zambia in shape. "Mayukaaaaaaaa!" he cries like an army drill sergeant whenever his striker fails to defend from the front.

His tactics and team selections have been both innovative and effective, a key factor in Zambia coming this far. Bwalya's brave decision to sack Dario Bonetti and reinstate Renard on the eve of the tournament has paid off.

Zambia are now just one game away from realising their dream. It will not be easy. A formidable Ivory Coast, yet to concede a goal, stand in their way.

No matter what happens against Ivory Coast, Zambia are winners at this Africa Cup of Nations. For reaching the final, for their resolve, for the pain of the last nineteen years and for the character and strength of a nation that suffered and grieved, but that rebuilt and gave hope.

For the drive and courage of men like Kalusha Bwalya and for the memory of his brothers lost. "God has given us this opportunity to be here and now we must win this Africa Cup of Nations for the Zambia national team from 1993," said Renard.

Zambia have already shown they are winners. All that remains now is to write it into history.