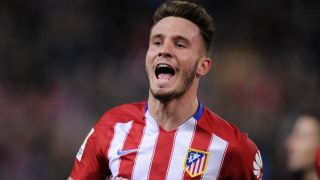 Saul believes Atletico Madrid have the quality to compete against any team in the world, as long as they have 11 men on the pitch.

Atletico suffered a 2-1 loss to Barcelona on Saturday, finishing the game with nine men after Diego Godin and Filipe Luis were shown red cards.

Koke had given Atletico an early lead at the Camp Nou, but Lionel Messi and Luis Suarez hit back to give Barca a 2-1 advantage, before Luis and Godin were given marching orders.

Saul was pleased with the way the team performed with nine men but lamented the lack of discipline in an important game against their title rivals.

"We come out to always win, in every stadium," he said. "The trouble was the red cards. But it stayed with me how we responded with nine.

"It's always hard with one less, let alone two. The only thing we could do is equalise on a counter attack.

"The errors hurt everybody, and we need 11 out on the field. But we have done a magnificent job. With the expulsions, we could not fight for the game. But with 11 it would have been a different story.

"With 11 men we can compete against any side."

The Spaniard added: "We now think about the next game, and change the dynamic. But for sure we will continue to fight for the league."