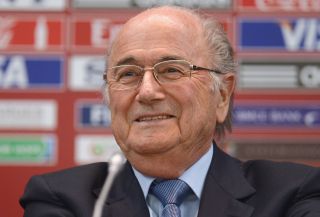 The 77-year-old's comments come despite preparation for the competition, which is to be hosted in Brazil for the first time since 1950, being beset by controversy.

Two people were killed in late November when a crane collapsed into the Arena do Sao Paulo in late November, while a worker at the Arena Amazonia in Manaus was killed last month after falling off the stadium roof.

The stadia in Coritiba, Sao Paulo and Cuiaba are not expected to be handed over to FIFA until mid-April, only six weeks before the tournament is due to start.

Blatter slammed the South American country for their slow progress on Monday, but the Swiss is still hopeful that the event will be an unrivalled success.

"2014, with all of the criticism, all of the people saying that it will be good. It will be the best ever World Cup because we are in the continent which is called Brazil," Blatter said.

"Two hundred million people - they are all footballers - they like football and (they hosted the) World Cup which was (in 1950) and in 2014 it is 64 years later.

"I have to say everyone is expecting, and football has changed, the rhythm of the football is different, the competition is different - we have 32 teams now - and back then there wasn't even 16.

"And Brazil and all of the population of Brazil can't all go in the stadia because there is not enough seats available but it will be great I'm sure it will be a great World Cup.

"We have had competitions such as the one in Italy (in 1990) where they hadn't finished putting in seats the day before the match and I would say it was not ready.

"But here we will be ready I am sure that in March all of the stadiums will be ready and we will have enough time to do some rehearsals and I'm sure this modern stadia will respond to the expectations of the spectators and the actors which are the players."