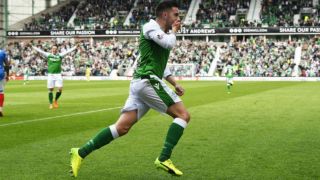 The home side, who needed to win by six goals to leapfrog the visitors in the table and claim a Europa League place, raced into a 3-0 lead to offer fans a glimmer of hope.

Rangers responded in style, though, roaring back to lead 5-3 with 68 minutes played, only to surrender their advantage after Jason Holt was sent off, with Jamie Maclaren scoring twice for the home side to complete his hat-trick.

Lennon raced onto the pitch to celebrate Maclaren's stoppage-time third and was sent from the dugout for the remaining seconds of a memorable match.

Florian Kamberi, with a penalty, Scott Allan and Maclaren all struck before the 20-minute mark to get Easter Road rocking, before James Tavernier and Jordan Rossiter made it 3-2 in the space of two minutes.

Substitute Bruno Alves blasted in a free-kick to make it 3-3 and Holt fired in off Efe Ambrose to put Rangers ahead in their last Premiership game before Steven Gerrard takes over as manager, before another Holt strike went in off Josh Windass to make it 5-3.

Maclaren got a goal back 70 minutes in and, after Holt earned a second yellow card a quarter of an hour later, Hibs' Australia international fired home in injury time to secure a point.

Aberdeen's win at Celtic meant Rangers could not have finished higher than third anyway, but Lennon seemed keen to add to any frustrations among the away fans with some over-zealous celebrations just before the final whistle.

"I was getting a bit of stick off the Rangers supports; I had to give them a bit back," the former Celtic boss told BT Sport afterwards. "I got sent off, but it was worth it."