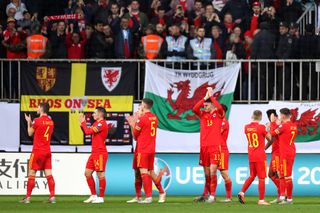 Wales and Hungary meet in a winner-takes-all clash for Euro 2020 qualification in Cardiff on Tuesday.

Hungary won the Budapest reverse fixture 1-0 in June but Wales have gone five games unbeaten since that defeat.

Reaching the semi-finals of Euro 2016 and the emergence of another talented generation has raised the expectations of Wales football fans. But Wales were suffocated by the Republic of Ireland when a 2018 World Cup play-off place was on the line. Wales lost 1-0 and Chris Coleman’s reign was all but over. This time the pressure is on Ryan Giggs to get it right – and a sell-out Cardiff City Stadium expects nothing other than victory. How Wales cope with the pressure will determine whether they qualify for a second-successive European Championship.

Big win! Back to Cardiff and on to Tuesday! 👊🏼🏴󠁧󠁢󠁷󠁬󠁳󠁿 #TogetherStrongerpic.twitter.com/JX6gxlWTj3— Gareth Bale (@GarethBale11) November 16, 2019

Gareth Bale’s return to action has certainly not gone unnoticed in Spain. Bale has not played for Real Madrid since October 5 after suffering a calf injury during the previous international break. The Spanish media reported the sight of Bale training as the ‘Miracle in Wales’. Bale managed to get an hour under his belt in the 2-0 win over Azerbaijan in Baku on Saturday. Giggs said Bale was “blowing a bit”, but those minutes provided vital preparation for Hungary. With their talisman in their team, Wales know anything is possible.

The main – possibly only – selection dilemma for Giggs revolves around the fitness of Aaron Ramsey. Joe Morrell, on loan at Lincoln from Bristol City, performed admirably in Baku, but it is unthinkable that the influential Joe Allen will not return from suspension. A fully-fit Ramsey would walk into any Wales team. But Ramsey has been frustrated by injuries and not played 90 minutes since joining Juventus last summer. Ramsey was used from the bench against Azerbaijan and that could happen again with Harry Wilson – who made one and scored in Baku – ready to build on possibly his best Wales performance.

Among the Welsh flags in Baku, ‘Kieffer Moore for Ballon d’Or’, stood out. It is fanciable to suggest that the former lifeguard turned Wigan striker will rival Cristiano Ronaldo and Lionel Messi when football’s top awards are handed out. But the 6ft 5ins striker has had a huge impact on Wales’ Euro 2020 campaign, offering an extra attacking dimension and taking the scoring burden off Bale. Moore has scored twice in three qualifiers and brought others into his play with his aerial ability. Hungary are without top central defender Willi Orban after the RB Leipzig man underwent knee surgery, and Moore could write another chapter in a remarkable football fairytale.

Giggs out to defy doubters

The appointment of the Manchester United great to succeed Chris Coleman in January 2018 was greeted with as much derision as delight in Wales. On the face of it, that would appear strange as Giggs is one of the greatest players to pull on a Wales jersey and gathered invaluable experience as United’s assistant manager under Louis Van Gaal. But the fact that Giggs regularly withdrew from Wales squads during his celebrated career was held against him by many. Leading Wales to Euro 2020 will go a long way to silencing the doubters.