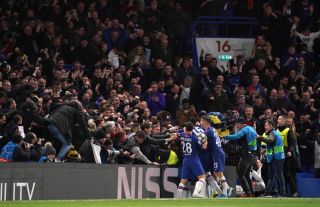 Champions League football returns with Chelsea and Manchester City both in action this week.

The Blues host Bayern Munich on Tuesday before Pep Guardiola’s side travel to Real Madrid on Wednesday.

Napoli will face Lionel Messi’s Barcelona on Tuesday, with Cristiano Ronaldo’s Juventus heading to France to take on Lyon 24 hours later in the first leg of their last-16 clashes.

Here, the PA news agency looks at some of the talking points surrounding this week’s ties.

The draw for the knockout stages brought Chelsea and Bayern Munich together in the Champions League for the first time since the London outfit’s most historic moment in the club’s history. In 2012, Roberto Di Matteo’s Chelsea won on penalties to claim their only Champions League success against Bayern in the final held at the German side’s home ground Allianz Arena. They have only met once since, with the Bavarian club gaining revenge by another penalty-shootout victory in the 2013 Super Cup. Only goalkeeper Manuel Neuer, defender Jerome Boateng and forward Thomas Muller still feature for Bayern from eight years ago, while former midfielder Frank Lampard is now in charge of the Blues having played 120 minutes and scored a penalty in the shootout.

Chelsea will have to contain in-form striker Robert Lewandowski if they are to have any chance of progressing to the quarter-finals of the Champions League. The 31-year-old has been in lethal form in front of goal this season, scoring 38 goals in just 32 games in all competitions. The Poland international has also carried this over into European football as he tops the goalscorers list alongside Borussia Dortmund’s Erling Braut Haaland on 10. Lewandowski is currently averaging a goal every 44 minutes in the Champions League and scored two in London against Tottenham in the group stages.

Since the draw was made in December, Manchester City have been banned from UEFA club competitions for the next two seasons and fined 30million euros (£24.9million) after being found to have “committed serious breaches of the UEFA Club Licensing and Financial Fair Play Regulations” by European football’s governing body. The first leg is held at the ground of the most successful team in European football history and it will provide the ultimate motivation to go out and win their maiden Champions League title, despite not being able to defend their crown as it stands next season.

Eden Hazard’s big-money move from Chelsea last summer went from bad to worse at the weekend as he limped off with an ankle problem during Real’s shock 1-0 defeat at Levante on Saturday. It was the Belgium international’s second game back from a three-month absence with a knee injury and he will miss the clash with former Premier League foes City and this weekend’s El Clasico. City boss Guardiola – who managed LaLiga rivals Barcelona between 2008-2012 – will still be wary of Los Blancos’ quality with the likes of Gareth Bale, Karim Benzema, Luka Modric, Toni Kroos and Sergio Ramos all in line to feature at some point at the Bernabeu.

Time for Messi and Ronaldo to catch up?

Messi and Ronaldo have a lot of catching up to do if they are to continue their sensational record as Champions League top goalscorer at the end of the season. The Barcelona captain has finished as the leading marksman on five occasions but trails his counterpart by one, with Ronaldo topping the pile six times. They shared the title with Neymar in the 2014-15 season after all three players netted 10 goals, however, they have only scored two apiece this campaign. They are eight behind Haaland and Lewandowski and it is likely we will not see either of their names on the competition’s Golden Boot for the first time since Kaka won it in 2007.