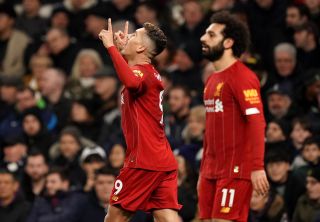 Liverpool sit 14 points clear at the top of the Premier League table with a game in hand as they edge ever closer to a first title in 30 years.

At the same time, the fight for top flight survival at the other end of the table has grown ever tighter with just six points separating Newcastle in 13th place from second-bottom Bournemouth.

Rampant City are not throwing in the towel

Defending champions Manchester City’s hopes of reeling in runaway leaders Liverpool may be close to non-existent, but if they are going to miss out, they will not do so without throwing everything they have at it. On Sunday, they eviscerated a hapless Aston Villa with an intoxicating brand of football as they romped to a 6-1 win at Villa Park in which Kevin de Bruyne and hat-trick hero Sergio Aguero turned in mesmeric individual displays.

Another week, another VAR controversy – or more accurately, series of VAR controversies. Arsenal’s Pierre-Emerick Aubameyang was sent off after a review of his challenge on Crystal Palace midfielder Max Meyer, but Liverpool defender Andy Robertson escaped the same punishment for a similar tackle on Japhet Tanganga. On Friday evening, Robert Snodgrass’ late ‘equaliser’ for West Ham at Sheffield United was harshly ruled out for handball by Declan Rice, while Everton’s Theo Walcott saw penalty appeals fall on deaf ears after being hauled back by Brighton defender Lewis Dunk.

Ings ain’t what they used to be

Southampton looked to be in trouble when they took just nine points from their first 13 games, which included a 9-0 home defeat by Leicester, but they have fought back superbly with six wins and a draw in their last nine. Crucial to that run has been the form of striker Danny Ings, who took his tally for the season to 14 in the league with the winner at Leicester on Saturday. Significantly, his last three goals have secured seven points from a possible nine.

🗣 "I was bringing my own style of play to the team, working hard and providing in other areas rather than just scoring goals. But yeah, it does feel good, of course."— Newcastle United FC (@NUFC) January 12, 2020

Miguel Almiron’s first 26 games in a Newcastle shirt failed to yield a single goal, leaving some questioning the wisdom of the club’s £21million investment in the Paraguay international. He finally broke his duck with a winner against Crystal Palace on December 21, and he scored his second league goal in Saturday’s 1-1 draw at Wolves a week after finding the net at Rochdale in the FA Cup to make it three in six outings.

It's all over on the south coast!!Three goals and three points for the Hornets 💪

Nigel Pearson took on a major challenge when he agreed to become Watford’s third manager of a season with just eight points banked from their opening 15 league fixtures. The former Leicester boss has taken little time to make his mark, guiding the Hornets to four wins – the last of them 3-0 at struggling Bournemouth on Sunday – and two draws in his first seven Premier League outings to lift the club out of the bottom three and significantly boost survival hopes.