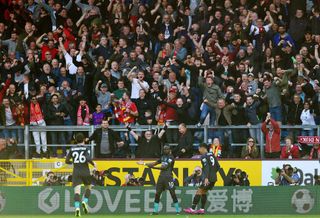 Liverpool remain top of the Premier League after extending their 100 per cent start, while Tottenham blew a two-goal lead to draw the north London derby with Arsenal.

Nothing to separate north London rivals

Tottenham were on course for the perfect response to last week’s shock home defeat to Newcastle after racing into a two-goal lead at Emirates Stadium. But Christian Eriksen’s early strike and a penalty from Harry Kane were not sufficient to earn Spurs the bragging rights. Prolific duo Alexandre Lacazette and Pierre-Emerick Aubameyang dragged the Gunners back level in a full-blooded contest, leaving both Unai Emery and Mauricio Pochettino with plenty to ponder.

VAR is supposed to intervene when match officials make ‘clear and obvious’ errors relating to goals, penalties, red cards or cases of mistaken identity. Yet, even when the criteria is met and incidents are reviewed, there seems to be a reluctance to overrule decisions. West Ham striker Sebastien Haller was denied a blatant penalty when he was upended during Saturday’s comfortable 2-0 win over Norwich, while Leicester’s Youri Tielemans was extremely lucky to escape punishment following a studs-up lunge at Bournemouth forward Callum Wilson.

Can’t believe the decision today to disallow the goal 🤦🏻‍♂️ should’ve came away with a point. We rest up now and go again after the international break #AVFCpic.twitter.com/CxttDD3Wdw— Jack Grealish (@JackGrealish1) August 31, 2019

While VAR should be helping to rectify glaring mistakes, it is powerless if referees stop play too early. Aston Villa were denied a legitimate late leveller in the 1-0 loss at Crystal Palace after match official Kevin Friend blew his whistle seconds before the ball hit the net to harshly penalise Jack Grealish for a supposed dive. The dubious call baffled Villa boss Dean Smith, and attracted plenty of criticism from pundits.

Tension between Salah and Mane?

Liverpool forward Sadio Mane vented his displeasure after being substituted in Saturday’s 3-0 win at Burnley. The Senegal international’s frustration appeared to stem from the apparent selfishness of team-mate Mohamed Salah. Reds boss Jurgen Klopp later laughed off the incident and, with his European champions the only top-flight club with a 100 per cent record, the German has plenty to smile about.

Chelsea boss Frank Lampard was given another reminder of the difficult task facing him at Stamford Bridge after his side threw away a two-goal lead to draw at home to newly-promoted Sheffield United. Despite the positive of another two goals for academy product Tammy Abraham, the Blues have yet to convince under their new manager, look shaky defensively and are struggling to maintain a performance for 90 minutes.