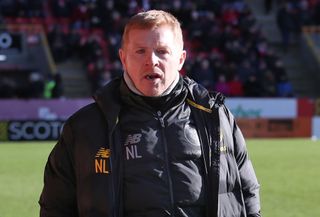 Celtic ended the weekend still 10 points clear of Rangers at the top of the Ladbrokes Premiership having played a game more.

Steven Gerrard’s side won 1-0 to keep on the tail of their Old Firm rivals who triumphed 2-1 at Aberdeen earlier in the day.

Here, PA news agency looks at five things we learned as the season takes another step towards conclusion.

Aberdeen certainly gave the Hoops a test when they played in their Sunday lunch-time kick-off at Pittodrie.

After Callum McGregor gave the visitors an early lead, the home side fought back to level through Ash Taylor but, although the Dons gave as good as they got, it was Celtic defender Kristoffer Ajer who scored late on to clinch victory.

Neil Lennon’s side are 10 points ahead of Rangers, who have a game in hand.

Rangers are hanging on in there

The Light Blues were under pressure after Celtic’s win in the Granite City.

There were some anxiety around windswept Ibrox as Steven Gerrard’s side battled the conditions and Livingston.

Midfielder Scott Arfield’s strike just before the hour-mark ultimately gave the home side three points and kept them in touch with their Old Firm rivals but there remains no margin for error.

The Rangers midfielder joined the Easter Road club on loan for the rest of the season on January 31, with Florian Kamberi moving in the opposite direction.

The 23-year-old has fitted in straight away with two goals in four games.

He opened the scoring in the 2-1 win at Kilmarnock on Sunday with a stunning strike in the first half and Adam Jackson restored the lead after Chris Burke had levelled, to take sixth-placed Hibs to within five points of third place.

Hearts are in trouble

Hearts remain at the bottom of the table after a dramatic match against fellow strugglers Hamilton.

Two goals from striker Marios Ogkmpoe put the visitors in a commanding position before the dismissal of Accies defender Jamie Hamilton – his third red card of the season – changed the complexion of the match.

Ten-man Hamilton could not hold out and second-half goals from Jamie Walker and Craig Halkett earned a point for Hearts but the result leaves the Tynecastle side one point behind their opponents at the bottom with just 11 games left to play.

St Johnstone continued their revival with a draw at Ross County albeit boss Tommy Wright thought his side deserved more.

Saints took the lead in Dingwall on Saturday through Stevie May – his sixth of the season – and looked on their way to their fourth successive win for the first time this season.

However, the Staggies fought back and levelled through Billy McKay but Wright’s side continue their good form following a slow start to the season and are unbeaten in five matches in all competitions as they look for a top-six spot.