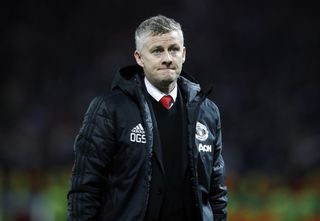 Chris Wood and Jay Rodriguez goals secured the Clarets’ first win at Old Trafford since 1962 as chants from an angry and disillusioned fanbase filled the air on Wednesday.

In the wake of the 2-0 home loss, the PA news agency has picked out five of the worst performances during Solskjaer’s reign.

Less than a month after his record-breaking caretaker stint led to his full-time appointment, the 1999 treble hero oversaw an alarming defeat to Marco Silva’s Toffees. United were thrashed 4-0 in an embarrassing capitulation at Goodison Park, meaning they had lost six of their previous eight games in all competitions. Richarlison, Gylfi Sigurdsson, Lucas Digne and Theo Walcott secured the hosts a deserved win and left Solskjaer promising changes to the squad.

As the energy and attitude shown during Solskjaer’s caretaker stint ebbed away, relegated Huddersfield took advantage as the home faithful enjoyed their last taste of Premier League football at the John Smith’s Stadium. This result ended United’s faint hopes of a top-four finish as the Terriers avoided a record-equalling 15th top-flight home loss. United faltered after Scott McTominay got them off to a fine start in West Yorkshire, where Isaac Mbenza punished a shambolic display to give Town fans an all-to-rare reason to cheer.

Solskjaer’s men ended a disappointing campaign in fitting fashion when hosting another already relegated side on the final day of the 2018-19 season. Having started his reign in December 2018 with a 5-1 win against his former club, Nathaniel Mendez-Laing’s brace was the difference as Cardiff beat United for the first time since 1960. The 2-0 loss left United an eye-watering 32 points behind Premier League champions Manchester City as their season ended without a win in six matches in all competitions, and just two victories from 12 games.

August’s home loss to Crystal Palace and the following month’s meek display in defeat at West Ham were bad, but the 1-0 loss at St James’ Park before the October international break set off alarm bells. Already struggling for fluency, inspiration and results, things worsened as Matty Longstaff sent Solskjaer’s side into a tailspin by firing hometown club Newcastle to victory on a dream Premier League debut. This 11th straight winless away match left United facing an uncomfortable fortnight of scrutiny and introspection.

December saw Solskjaer mastermind an impressive victory over Jose Mourinho’s Tottenham before stunning Manchester City at the Etihad Stadium, but the undercooked and underwhelming display at embattled Watford highlighted the underlying issues at United. While the first half of the 3-3 draw at Sheffield United was arguably their worst performance to date, this was Solskjaer’s most chastening loss of the campaign. David De Gea somehow let in Ismaila Sarr’s shot at the start of the second half and Troy Deeney quickly scored a penalty foolishly given away by Aaron Wan-Bissaka as new manager Nigel Pearson’s first home match in charge ended in victory for the then rock-bottom side.