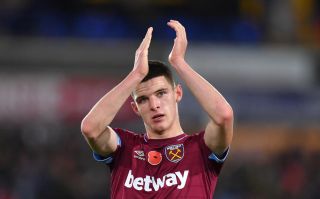 West Ham midfielder Declan Rice has been called up to the England squad for the first time for the forthcoming Euro 2020 Qualifiers.

Gareth Southgate has picked the 20-year-old in his squad for England’s games against the Czech Republic and Montenegro later this month.

When you've just made your debut for @WestHamUtd… 😊⚒️ pic.twitter.com/oCXzpkyesD— West Ham United (@WestHamUtd) May 22, 2017

Having been included in a couple of matchday squads towards the end of the 2016-17 season, Rice made his senior debut against Burnley at Turf Moor on the final day of that campaign – coming on as a stoppage-time substitute in a 2–1 win. His full senior debut came at the beginning of the following season in a 3–2 defeat at Southampton.

Rice scored his first career goal two days before his 20th birthday on January 12 this year to fire West Ham to a 1-0 home win over Arsenal. He struck three minutes into the second half, when Granit Xhaka made a mess of clearing a cross and Samir Nasri tapped the ball to Rice, who gleefully curled it home.

Rice was named Republic of Ireland’s young player of the year on Tuesday — despite no longer representing them. The midfielder decided in February that his international future lies with England, even though he has Irish grandparents and has already received three Republic of Ireland caps at senior level. His switch was ratified by FIFA last week and England manager Southgate has included Rice in his squad at the first opportunity.