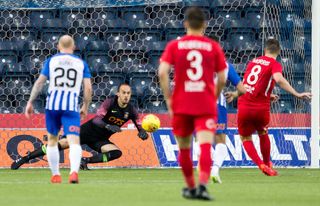 Kilmarnock captain Gary Dicker has described as “a disgrace” following up a record-breaking season with the club’s worst performance of all time.

Killie crashed out of the Europa League qualifiers at the first hurdle after letting slip a first-leg lead with a 2-0 home defeat by Connah’s Quay Nomads.

Dicker claims the result, in the first European game at Rugby Park for 18 years, has to be the worst in the club’s 150-year history.

“It’s got to be,” said the midfielder. “We have got to take the blame for it. We got the plaudits last year, record-breakers but we are breaking the wrong records this year.

“It’s just not good enough. As players it’s embarrassing. The fans have waited that long to get here and we dish up that. I’m gutted for them more than anyone. They have been through enough over the years.

“We have worked that hard, and then to dish that up, it’s embarrassing, a disgrace, whatever you want to call it.”

The Irishman felt they failed to apply the basics against the Welsh part-timers.

“I don’t think complacency is the word,” the 32-year-old said. “It was just not doing what we are good at, what got us here – hard work and graft and helping each other out. The minute we think we are better than that, we are in trouble.

“We’re getting used to playing a different way but we have still got to manage the game as players. We will take full responsibility for it. I will, I’m sure the rest of the lads will.

“I’m not going to sugar-coat it or say it’s early on, it’s just not good enough as a group and a club. We embarrassed ourselves and our fans to be honest with you. It’s hard to take.