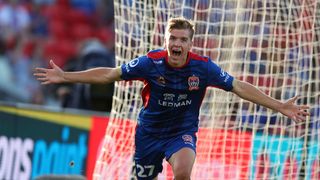 Newcastle Jets cemented their place in the top two of the A-League with a 2-0 victory over Melbourne Victory played out in front of new Socceroos coach Bert van Marwijk.

The Jets are clinging onto the coattails of runaway leaders Sydney FC, and closed the gap back to nine points with Saturday's success at McDonald Jones Stadium.

Nigel Boogaard headed home a free-kick in the first half, before Australia youth international Riley McGree scrambled home a 70th-minute goal to make sure of the points after good wing play from Andrew Nabbout.

Nabbout has impressed since returning to the A-League with the Jets in 2016 and has been mentioned as a chance for the Socceroos World Cup squad. Another fine performance in front of the new national coach will do his chances no harm.

Glee for Riley McGree! The midfielder found the back of the net following a superb cross from Andrew Nabbout! February 3, 2018

Andy Keogh had put Glory ahead in just the fourth minute, but Adelaide had the game turned around before half-time through Dino Djulbic's own-goal and a Nikola Mileusnic strike.