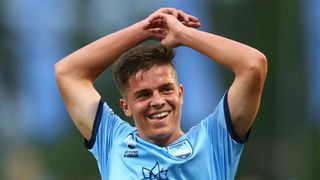 Nigel Boogaard's own goal helped Sydney FC to a 1-0 victory over Newcastle Jets that saw Steve Corica's men draw level on points with second-placed Melbourne Victory in the A-League standings, while leaders Perth Glory were held to a 0-0 draw at Melbourne City.

The sixth own goal of Boogaard's A-League career condemned the Jets to a third consecutive defeat and their fifth in seven matches, while Sydney have now won six of their last seven to heap pressure on the top two.

Perth dropped points for only the fourth time this season despite creating the better chances at AAMI Park, where Melbourne City have lost just once this term.

The result leaves Tony Popovic's Glory four points clear at the top of the table but he will be disappointed not to have made it six.

FT | @PerthGloryFC extend their lead to four points at the top of the @ALeague ladder. #ALeague#MCYvPERpic.twitter.com/oEuk0bfDX8— Hyundai A-League (@ALeague) January 19, 2019

Sydney went into their clash with Newcastle having bounced back from defeat at Perth with a victory over Adelaide United, and the visitors' high press played into their hands.

With half-time approaching, the Sky Blues piled forward in search of a breakthrough and Alex Brosque was poised to meet Brandon O'Neill's cross but Boogaard's outstretched foot turned the ball past Glen Moss and into the Jets net.

Meanwhile in Melbourne, Neil Kilkenny gave the hosts an early scare when his swerving drive from the edge of the box drew a good save from the alert Eugene Galekovic.

Glory could have snatched three points with eight minutes left on the clock when Andy Keogh teed up Jason Davidson for a shot at goal but the wing-back blasted the ball over the crossbar and the points were shared.