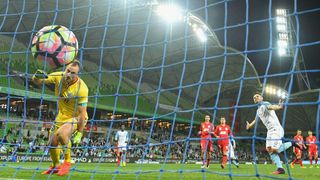 Melbourne City beat Adelaide United 2-1 at AAMI Park on Friday to condemn their visitors to a third successive A-League defeat.

A Bruno Fornaroli double sealed the victory for City in a result which takes them level on points with table-topping Sydney, who have a game in hand.

Fornaroli is in prolific goal-scoring form for Melbourne, with the double taking his tally to four in his last three league games.

His first goal came via a delightful curled strike from the edge of the box, before he added another early in the second half with a cheeky penalty.

A bullet header from Sergi Guardiola in the 64th minute gave Adelaide hope, atoning for the handball which resulted in Fornaroli's spot-kick, but City hung on for the victory.

Adelaide, who had seen Ryan Kitto head against the bar in the first half, have just one point from their opening four A-League games, and could go bottom if other results go against them on matchday four.