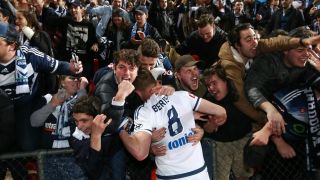 John Aloisi's men started the campaign with a 1-1 draw with Melbourne Victory before a heavy 4-0 defeat at the hands of Newcastle Jets last week.

Roar got up and running on Saturday, though, with Thomas Kristensen scoring the only goal of the game after 33 minutes.

Jamie Maclaren and Brandon Borrello both spurned chances to add a second and put the match to bed, but Kristensen's first-half strike proved to be the difference between the sides.

Elsewhere, Marco Rojas netted a stoppage-time winner to help Victory to a 2-1 success over Adelaide United.

Besart Berisha handed Melbourne the lead after 20 minutes when he found the net after being set up by Rojas following a quick counterattack.

Hosts Adelaide pushed hard to get back into it after the break and deservedly levelled halfway through the second half, Tarek Elrich finding the top corner with a sweet strike after cutting inside.

Danny Choi and Sergi Guardiola both came close to netting the winner for Adelaide when they hit the post in the closing stages of the game, before Rojas popped up in the 93th minute to deliver Victory a dramatic win instead when he poked home from close range.