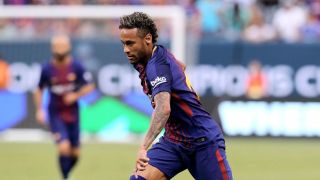 Neymar's world-record transfer to Paris Saint-Germain was a contributing factor to Barcelona's false start to the season, according to head coach Ernesto Valverde.

Brazil superstar Neymar completed a stunning €222million switch to PSG in August and Valverde's reign got off to an inauspicious start shortly afterwards as Real Madrid stormed to a 5-1 Supercopa de Espana triumph over their bitter rivals.

But Valverde's Barca have not tasted defeat since and are looking down from the top of LaLiga after eight wins and a draw from nine matches – five points better off that reigning champions Madrid.

Third-tier Real Murcia are next on the agenda for the Catalan giants as they begin the defence of their Copa del Rey crown on Tuesday and, speaking at a pre-match news conference, Valverde reflected on his turbulent early days at the helm as Luis Enrique's successor.

"I think everyone has their opinion," he said. "It is true that at those moments the situation really did us a bit of harm.

"The environment as well. There was a lot of noise around the club.

While Lionel Messi has been in sensational form for club and country this season, the other member of the fabled MSN forward line – Luis Suarez – has been more erratic in front of goal.

His fine header at Atletico Madrid nine days ago to preserve Barca's unbeaten record in LaLiga was only his third of the top-flight campaign and he cut a frustrated figure after being substituted without scoring in the 2-0 weekend win over Malaga.

Valverde confirmed the Uruguay striker would be one of a host of stars to rest up against Murcia and hopes the break will do him good.

"He is going to rest on Tuesday," said the Barca boss. "He is not selected and that will be good for him.

"We've talked about this before. He is a player who has a lot of chances. If he didn’t have chances that would worry me.

"It's a question of the centre-forwards getting the chances. He has them and generally Luis has opportunities in every game because of the way he plays.

"So, I'm not too worried. Now he has a week where he is not taking part. Hopefully he can keep getting chances and will score goals."