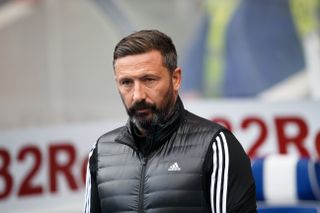 Aberdeen boss Derek McInnes stressed the importance of building some positivity around the club as they recover from their coronavirus controversy and subsequent stop-start beginning to the season.

A Lewis Ferguson penalty and a Scott Wright strike, both in the first 10 minutes of the second period, earned the Dons the points against Livingston despite Scott Pittman’s goal setting up a tense final 20 minutes.

It was their second successive win since returning to action after the Dons saw three games postponed due to two of their players testing positive for Covid-19.

McInnes said: “We’ve watched everybody else getting their season up and running and you’re watching with envy. We’ve been desperate to get going and get some positivity going. The best way to do that is to win games of football.

“We scored two good goals today, we threatened to score a couple more. It could have been more comfortable for us in the second half but at this stage of the season – if you ask any manager – it’s just all about getting three points.

“We’ve had two tough games and taken six points. We’ve never had it easy against Livingston but we’ve found ways to win. We got the job done and I couldn’t be more pleased with the boys.”

Livingston boss Gary Holt was critical of his side’s defending as they emerged from the game with nothing.

He said: “I spoke at half-time about how well we were doing and that the first 10 minutes of the second half were crucial, but I thought we gave two soft goals away. It’s something we need to eradicate because it seems to be a failing of ours at the moment.

“Robby McCrorie has made a great save late in the game, but before that he’s had nothing to do but had to pick the ball out of the net twice and it’s not fair on him.

“The players have to take responsibility to make something happen either offensively or defensively. You have to do your job, and we let them in too easy for the two goals.”