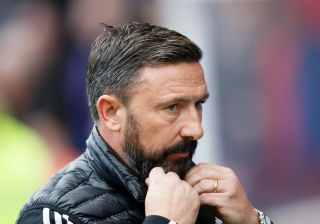 Aberdeen manager Derek McInnes will be driven on by fan criticism, according to his assistant Tony Docherty.

The Dons sit fourth in the Ladbrokes Premiership but McInnes has come under fire after some uninspiring displays following the winter break.

His team needed a late penalty to knock Dumbarton out of the William Hill Scottish Cup and then lost at home to third-placed Motherwell.

Quoted on the Aberdeen website, Docherty said: “First of all, we need to put the criticism into perspective, we have had loads of correspondence from fans to say it was around half a dozen people that were aiming criticism towards the dugout.

“We have had loads of correspondence from people saying they were embarrassed by it.

“Every year under the stewardship of Derek McInnes we have finished in a European place which is historical for this club.

“On four occasions we have finished on 70 points or more. He is a manager who has got a 55 per cent win ratio.”

Docherty added: “The criticism can be an added motivation.

“It makes the manager driven. It makes all of the players and the staff driven because it is something that should not be directed at such a good manager.

“Our objectives are set at the start of the season. The evidence is there from the last seven years.

“That is why there is an anger from everyone at the club that this narrative is there, and it is being fed by people who should know better.

“We need to realise at this football club at how good a manager we have got, and we need to be respectful of that. There is an anger coming from me because I find the whole thing hugely disrespectful towards Derek.”