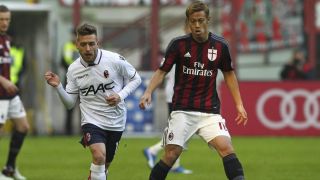 Sinisa Mihajlovic is facing severe pressure at AC Milan after Emanuele Giaccherini snatched a 1-0 win for Bologna at San Siro on Wednesday.

Milan boasted an 11-game unbeaten run against their opponents heading into the clash and goalkeeper Antonio Mirante made three good saves to deny the hosts a first-half advantage.

Bologna, who could have seen Amadou Diawara sent off for an elbow early on, have sharpened up their away form under Milan legend Roberto Donadoni and almost snatched the lead through Giaccherini as they maintained their bolder attacking approach.

Carlos Bacca had the ball in the net in the closing stages only to be denied by the offside flag as Milan pressed for a winner, but it was Giaccherini who found the breakthrough as he buried a finish from close range with 10 minutes left.

Mihajlovic insisted prior to the match that he did not fear the sack, despite ending 2015 eight points behind Serie A leaders Inter, but pressure will only mount on the Serb as Milan lost ground on the top three.

Bologna served Milan enough warnings of their ability on the break and only a smart intervention from Alex early on denied former Milan striker Mattia Destro a certain goal after Gianluigi Donnarumma had faltered.

The visitors' poor start was almost undone as Diawara was fortunate not to see red on 21 minutes for landing a forearm on the side of Andrea Bertolacci's head.

Milan finally called Mirante into action as he parried Ignazio Abate's cross into M'Baye Niang's path before scrambling to his feet to stop the rebound, before reacting smartly to tip Giacomo Bonaventura's effort over the bar from close range after good work from Keisuke Honda.

Carlos Bacca spurned the best opportunity of the half just before the whistle as Abate's long pass sent him clean through in the area only to shoot straight at Mirante, before Niang blazed the rebound over.

Giaccherini was inches from snatching the lead for Bologna as he just failed to connect with Matteo Brighi's clip across goal and Niang slipped at the worst possible moment with the goal gaping just five minutes later in an end-to-end start to the second period.

Substitute Alessio Cerci wasted a glorious opening to break the deadlock as he raced into the area unmarked, but his attempt to round Mirante took him too close to the byline and the chance went begging.

Bacca turned a header into the far corner only to see the assistant referee correctly raise his flag for offside, and Milan were dealt the ultimate sucker-punch with less than 10 minutes to play.

Anthony Mounier clipped a fine cross to the far post to Giaccherini who, having evaded the offside trap, brought the ball down before firing beneath Donnarumma from close range to silence the sparse San Siro crowd.

A shell-shocked Milan upped the tempo in search of a leveller but Bologna held out to end their dismal run against the Rossoneri and leave Mihajlovic feeling the heat.