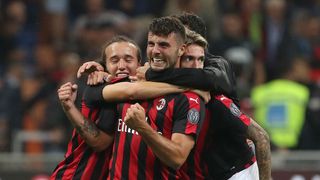 Patrick Cutrone gave AC Milan lift-off in Serie A this season as the substitute snatched a 2-1 victory over Roma deep into stoppage time at San Siro on Friday.

Stand-out recruits Gonzalo Higuain and Steven N'Zonzi each had goals ruled out via VAR reviews for their respective sides after visiting defender Federico Fazio cancelled out Franck Kessie's 40th-minute opener.

It was a frustrating night in front of goal for Higuain but the ex-Juventus man turned provider in the 95th minute, threading a fine pass for Cutrone to slot home.

Gennaro Gattuso led raucous celebrations as his team bounced back from last weekend's chastening 3-2 loss at Napoli, while Eusebio Di Francesco's Roma are now winless since the opening weekend.

The breakthrough arrived when Ricardo Rodriguez proved too nimble for Fazio and Kessie caught the left-hand side of Roma's defence napping – stealing in for a close-range finish.

Higuain sloppily lost possession for his opposite number in Roma's attack, Edin Dzeko, to curl wide in the 49th minute.

The pressure was building on Milan and Fazio atoned for his part in the opener with a fine volleyed finish when the ball was worked back into the box after Gianluigi Donnarumma punched poorly from a corner.

The Rossoneri thought they had an instant response but replays showed Higuain was fractionally offside when he scampered in between Fazio and Kostas Manolas to finish coolly.

N'Zonzi was the next man to fall foul of technology, although the shaky set-piece defending on display from the hosts made Roma appear the most likely winners. Cutrone had other ideas.

What it means: Good news for Juventus already

Cristiano Ronaldo's signing understandably stole the headlines but Juventus are confronted by an ambitious chasing pack this season. Among them, Roma have four points from nine and Milan are yet to truly convince, despite this last-gasp victory.

Pat on the back: Olsen looking the part

Alisson left sizeable gloves to fill at Roma. Olsen might lack the flashy footwork of his Brazilian predecessor but he is proving an instantly reassuring presence and chipped in with fine saves in either half.

Boot up the backside: Donnarumma ensures tale of two keepers

By contrast, Donnarumma was culpable for Roma's equaliser. The youngster's talent is beyond doubt but, as Gianluigi Buffon plays out the autumn of his career in Paris, it is time for him to eradicate such lapses from his game.

After a weekend of watching their rivals in action and the subsequent international break, Roma must bounce back at home to Chievo on the same day Milan travel to Cagliari.