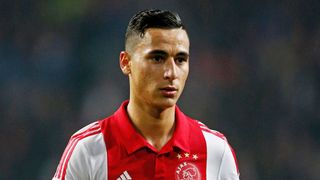 AC Milan chief executive Adriano Galliani has confirmed the San Siro side are interested in signing Ajax winger Anwar El Ghazi, but has stressed they will have to sell first before looking at potentially bringing in replacements.

A number of recent reports from Italy suggested Milan have earmarked the Netherlands international as the perfect addition to their attack and are preparing a €10million offer for the 20-year-old.

Galliani acknowledged they are indeed keeping a close eye on the Ajax star, although a transfer still seems far away.

"El Ghazi is a player we like," Galliani told reporters.

"But we cannot do anything unless one of our other wingers leave the club first.

"That's the way things are at the moment."

El Ghazi started his career with Sparta, but joined Ajax in 2013 before breaking into the first team at the Rotterdam side.

He made his official debut at Ajax in August 2014 in the Johan Cruyff Shield defeat at the hands of PEC Zwolle and has since developed into a key figure at the Amsterdam ArenA.

The attacker has netted eight goals in 13 Eredivisie appearances so far this term, setting up one more.