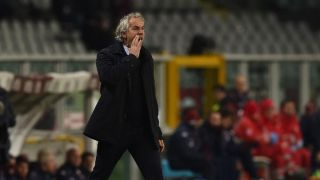 Roberto Donadoni has played down Bologna's improved form since his arrival ahead of the AC Milan great taking his side to San Siro to face his old team on Wednesday.

Rossoneri favourite Donadoni took over from Delio Rossi in October, with Bologna having lost eight of their opening 10 Serie A games this season following their return to the top flight.

Donadoni has since stabilised the Rossoblu, who sit 15th - five points off the drop zone - after taking six points from three games before the mid-season break.

Bologna have won three of their last four away games while Donadoni has a record of three wins, two draws and seven losses against Milan as a coach in Serie A.

Donadoni lifted six Scudetti and three European Cups during two playing stints at San Siro and hinted during a recent interview he would be open to coaching Milan in the future.

Reflecting on Bologna's improved form, the former Italy international told Corriere dello Sport: "Our path is still difficult and January will be particularly tough with the distractions of the transfer window and ideas about where we could end up.

"Our only objective is to secure safety, the rest is just chatter. When a coach arrives mid-season, it means the team is struggling.

"I simply gave everyone the enthusiasm and desire to do what I like to do. Enthusiasm can become contagious."

Sinisa Mihajlovic's side meanwhile go into the new year sixth after ending 2015 with back-to-back wins over Sampdoria and Frosinone although a mixed campaign sees the Milan coach's future remain less than certain.

Milan have lost only one of their last 10 league fixtures and are unbeaten in the last four but sit eight points off leaders and cross-city rivals Inter.

Defender Alex - on target against Frosinone - maintains Mihajlovic is the man to keep Milan's season on track.

"Frosinone was difficult, we went there for the three points and we did that. We talked about this before the game - to win to have a good end of the year and now we want to keep winning," he told Milan Channel.

"I'm satisfied with my first half of the season. With this staff we are working well, Mihajlovic is a bit harder than other coaches I've had but he does it for the team, he is very good and helps us to ensure that every one of us gives our best on the field.

"January will be a very important month and all players in the group will be important."

- Milan are unbeaten in their last 11 league games against Bologna.
- Milan have won five of the last six opening games of the calendar year, but lost last time on their return from the Christmas break against Sassuolo in January 2015.
- Bologna have made only 158 shots so far – fewer than any other Serie A team this term.
- Carlos Bacca has scored eight goals from his first 15 shots on target in Serie A.
- Giacomo Bonaventura is the player that has made the most shots on target in this campaign for the Rossoneri (16), and he has also made the joint-most assists of the whole Serie A (six).