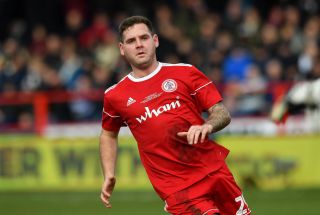 The 29-year-old has spoken openly about the problems he has faced and did not return to pre-season training with Sky Bet League One Accrington last summer.

“Everyone knows my ongoing issues with depression and anxiety and in the summer I made it known about my bulimia which has affected me since I was at Leicester,” Kee told the club’s official website.

“The most important thing is my health and my family, my wife Leigh and two sons and, now I have made the decision, I feel in a better place.

“Accrington will always have a place in my heart and I can never thank owner Andy Holt, manager John Coleman and assistant manager Jimmy Bell enough for everything they have done for me.”

Kee, who attended Accrington’s draw at Burton last weekend, is hoping to be at the home game with AFC Wimbledon on Saturday to say his goodbyes to the club.

The Northern Ireland Under-21 international, who also played for Torquay, Burton, Scunthorpe and Mansfield, became a firm fans’ favourite at Accrington.

Kee scored 83 times in 242 appearances during two spells at the club, and his 26 goals in the 2017-18 campaign fired Accrington to the League Two title.

Coleman said: “We want to thank Billy for everything he has done, his health is paramount and we want him to get well.

“I class Billy as a good friend and he is the closest person to family as a player.

“I am glad he will get his chance to say his farewell for all the efforts he has put in and all the special moments he has given the fans.”

Holt added: “We were aware of the problems Billy had from the end of last season and the last six-eight months we have been trying to find a solution.

“We knew Billy’s heart was not in it at this level and he needs to find time and space and a new future for him. He is welcome here anytime.”