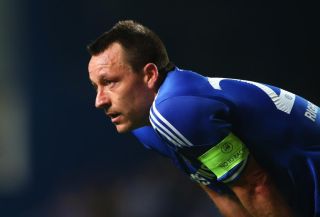 The Chelsea captain quit the national side after falling out with the Football Association in 2012 after being found guilty of racist abuse, but his impressive form this season prompted suggestions he may go back on his decision and make himself available for selection.

The 33-year-old quashed speculation of a comeback once and for all, but Adams feels Hodgson should have persuaded the former England skipper to perform a U-turn.

"That's part of the job of the coach, isn't it?" he is quoted as saying in  The Guardian . "Part of the job is to work with the players. It does worry me. Terry Venables would have been straight on the phone to John.

"It has got to be the coach's responsibility. Why are we paying him X amount of pounds? Everyone can get them tactically right. Pick a team of your best players and stick them out there, and get them into a shape and say: 'Go and play and ra-ra-ra.'

"Terry (Venables) was great at that. You are partly a manager for that: Talking to players, what they need, what they don't need."

Adams refused to accept that Terry had fallen out of contention due to Hodgson's desire to plan for future tournaments.

"If you are going to go like that, throw the kids in," he added. "If you think you can win in Russia 2018, I can understand that.

"If you said 'right, leave Ashley Cole and John Terry at home, don't even talk to him, he brings all the c**p with him,', well you wouldn't take (Wayne) Rooney either, would you? Or (Steven) Gerrard. Where do you draw the line?

"I think you have got to work with the players you have got. Try and get the best out of them. If you can do that, I still think we might still fall short but we will have a better chance.

"I don't know where Roy is going with this. If he thinks these guys can win it, I am not sure.

"I would have six months ago been talking to John. I would definitely have taken him out to lunch and seen where he was and tried to convince him to come and play.

"It's played into Chelsea's hands, hasn't it? (Chelsea manager Jose) Mourinho is saying 'thank you very much, I have got him all summer, I have got my captain for next year'. He started 34 of 38 league games for Chelsea this year."