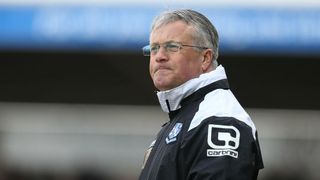 Adams took over from Rob Edwards in October, with the club languishing at the foot of League Two with nine points from their opening 12 matches.

Since then, fortunes have hardly improved with Tranmere still rock bottom after a run of just one win in their last 13.

Saturday's 3-0 home defeat at the hands of Oxford United leaves them two points from safety, with their last two matches coming against promotion chasers Plymouth Argyle and Bury.