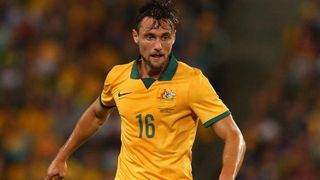 Holland, 27, returns to his homeland after seven and a half years abroad, most recently with German outfit Duisburg.

A 15-time international, Holland said he was thrilled to have finally found a new club.

"It feels really good to have signed with Adelaide United," he said.

"It's been a little bit of a long break since last season for me, but it’s great to finally put pen to paper with the reigning champions of the A-League.

"It feels just like yesterday that I was flying to Europe to begin my journey over there, so it's a little strange to be back in Australia to play my football.

"But, like I said, I'm very happy to be in Adelaide after watching the league last year because United's success was very hard to miss after the run the team went on.

"Now that I'm part of this team, I'm here to win, and I want to be successful at the club."

Holland signed with AZ Alkmaar after impressing with the Newcastle Jets in the A-League, before stints at Sparta Rotterdam, Austria Vienna and Duisburg.

Adelaide have lost the likes of Craig Goodwin, Stefan Mauk, Bruce Djite, Pablo Sanchez and Bruce Kamau, but have added Holland and Henrique among others.

They open their title defence against Holland's old club, Newcastle, on October 9.