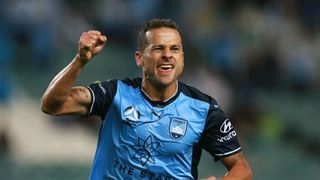 Champions Sydney FC claimed a fourth win in a row over Adelaide United on Friday to move five points clear at the top of the A-League.

Bobo struck the only goal of the game to secure a 1-0 victory for the visitors at Coopers Stadium, bringing the Reds back down to earth following back-to-back league wins.

It was a frustrating way for United to suffer their fourth top-flight loss of the season, with Bobo also having scored the crucial goal in their defeat to Sydney in the FFA Cup final on November 21.

The first half was a balanced affair but Sydney snatched the lead just before the interval. Joshua Brillante's raking long ball was superbly turned back across goal by the sliding Luke Wilkshire, where Bobo was on hand to side-foot home from 12 yards out.

United enjoyed plenty of the ball after the break but struggled to fashion clear-cut chances, although Ersan Gulum was not far off with a strike from close range after being teed up by Ryan Kitto.

Marco Kurz's side pushed forward in the closing stages but could not find an equaliser, meaning Sydney move clear of Newcastle Jets at the top, while United stay fourth.