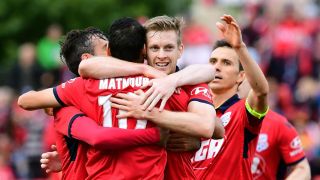 Marco Kurz's side secured a first home league win of the season courtesy of Ryan Kitto's double, which came after Robert Cornthwaite had seen red for the visitors.

A VAR review saw Cornthwaite punished for handball in the area and handed a second yellow, but Diawara's spot-kick struck the left-hand upright.

However, Adelaide took the lead on the stroke of half-time courtesy of Kitto's cool far-post finish and he doubled his tally just past the hour mark, capitalising on excellent work from Nikola Mileusnic.

Another VAR review saw Ben Garuccio's yellow for a foul on Roly Bonevacia turned into a red, but still there was no way back for the Wanderers as coach Josep Gombau suffered defeat against his former club.

The result snapped a run of five consecutive league draws for Gombau's side, while Adelaide climb to fourth.