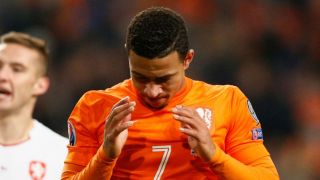 Former Ajax, Porto and Twente coach Co Adriaanse has offered a scathing assessment of Memphis Depay's conduct during the early stages of his Manchester United career.

Depay joined United after inspiring PSV to the Eredivisie title last season but he has found life tough in the Premier League so far and was dropped to be an unused substitute as Louis van Gaal's team beat Everton 3-0 on Saturday.

The 21-year-old attracted what Adriaanse thought was unnecessary attention when he joined up for international duty for the Netherlands wearing a flowing scarf and a wide-brimmed hat.

The veteran tactician also feels the forward does not readily buy into the team ethos and is projecting a negative image of Dutch players to the wider world.

"He needs to be corrected," Adriaanse told Studio Voetbal. "He must realise that he is a member in a football team, that he is not just an individual - a 100 metre sprinter like Usain Bolt.

"He arrived as a Peruvian pan flute player at [Netherlands team hotel] Huis ter Duin. If you are a young boy and still have not done anything, do not play dress up as you report to the coach.

"[Cristiano] Ronaldo does that, but at least he is proven.

"He does not even talk to the press, which he ignores. That cannot be the way.

"He represents us, the Dutch people. And we want to know what he thinks. He should always speak to them, and must be corrected."