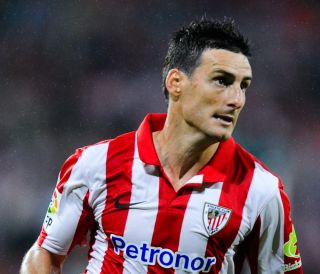 The Spanish outfit host their Serie A counterparts in the UEFA Champions League play-off second leg at San Mames.

Following a 1-1 draw in the opening leg in Naples last week, a 0-0 draw will be enough to see Athletic advance to the first round proper on away goals, but Aduriz has warned against such cautious tactics.

"I think that the idea of playing an entire game without goals will be difficult," he said in a press conference on Tuesday.

"We must be aware and avoid conceding, but also try to score right from the start.

"We mustn't hope for a 0-0 draw or for no goals. It would be a mistake. We need to play a perfect game in every respect."

"It's difficult that a team can dominate both legs of a tie," he said.

"At the [Stadio] San Paolo we went through a tough moment after their goal. We know Napoli are strong, which is why we must take advantage of any opportunities we get and be careful in defence.

"The 1-1 result means Napoli have no choice but to score a goal. We've never had a 0-0 at the San Mames, so we will try to play in our usual style and ensure our approach wins out.

"I don't know what Napoli will do to mark Muniain, but we don't have any secrets and neither do they. Iker can draw defenders to him and open up space for his team-mates."