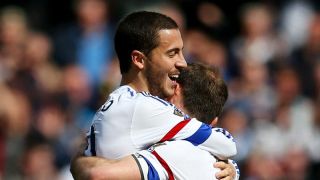 Eden Hazard scored his first and second Premier League goals of the season as Chelsea beat AFC Bournemouth 4-1 at The Vitality Stadium.

The Belgian marked his return from a hip injury with the second and fourth Chelsea goals after Pedro had given the Premier League champions an early lead on the south coast.

After defeats in their previous two games, Chelsea were in danger of being caught by Bournemouth in the Premier League table, but Hazard's double either side of a Willian goal proved enough to clinch victory despite Tommy Elphick pulling one back for the Cherries.

Hazard made his return to the starting line-up after more than a month on the sidelines, while Bournemouth boss Eddie Howe started Lewis Grabban and Marc Pugh in place of Max Gradel and Matt Ritchie.

Charlie Daniels forced an early save from Asmir Begovic as Bournemouth looked to take the initiative, but Chelsea countered and Cesc Fabregas was allowed time and space to thread a pass to Pedro, who skilfully chipped the ball round Artur Boruc and into the net.

Grabban had two golden chances to open his Bournemouth goal account but shot straight at Begovic from a tight angle after a solo run, and later headed Junior Stanislas' pinpoint cross just over the bar.

Against the run of play, Chelsea doubled their lead after 34 minutes. A break down the left culminated in Fabregas flicking the ball to Hazard and he thumped a low drive into the corner of the net from 20 yards.

But just over a minute later, a well-worked short corner found Elphick, whose downward header bounced up and over the outstretched hand of Begovic to give Bournemouth a lifeline before half-time.

Chelsea looked better organised after the break, and Diego Costa was a whisker away from connecting with Baba Rahman's cross when he slid in to try to finish a crisp passing move.

John Obi Mikel, operating as part of a makeshift Chelsea defence, made a crucial block to prevent a curling Stanislas cross from reaching Benik Afobe, who was lurking menacingly at the far post.

Bournemouth sent on Callum Wilson as they chased an equaliser, but their best chance fell to Stanislas with the winger flashing a shot just wide of the post from the edge of the box.

The impressive Fabregas turned on the style in the closing stages, and he played Hazard in with a breathtaking first-time, back-heeled pass, only for the Belgian to square the ball to Costa when the shot was on, and the Spain international squandered the chance.

Moments later Fabregas got his third assist of the afternoon, threading a weighted pass into the area where Willian dinked a shot over Boruc and the Spaniard was also involved in the fourth, playing in Nemanja Matic who cut the ball back for Hazard to finish.