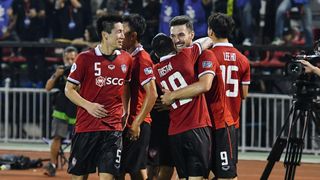 Muangthong United stand on the brink of a first foray into the AFC Champions League knockout rounds after a 1-0 win over 2012 winners Ulsan put them top of Group E with two games to play.

The Thai champions had never won a game in the competition proper before this season, but their second of 2017 puts them in the driver's seat to advance.

Captain Teerasil Dangda scored the all-important goal in the 37th minute, latching onto a knock-down to score at the back post.

Victory could have been by a greater margin, but Spanish striker Xisco screwed wide when one-on-one, while Ulsan goalkeeper Kim Yong-dae produced three big saves and Muangthong had a further effort cleared of the line.

Brisbane had lost 6-0 and 3-0 in their previous two Champions League games, but their hopes of a knockout spot remain alive thanks to goals from Jamie Maclaren and Brett Holman. Ryota Nagaki scored late for Kashima, but it was not enough.

In Group G, Suwon Bluewings went top by thrashing Hong Kong's Eastern 5-0, jumping above Guangzhou Evergrande after the Chinese giants were held 0-0 by Kawasaki Frontale - the Japanese side's fourth draw from as many group games.