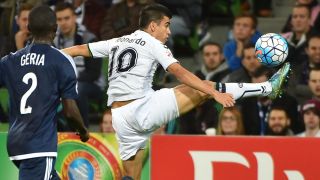 Jeonbuk Motors snatched a slender advantage after Leonardo's brilliant free-kick secured a 1-1 draw away to Melbourne Victory in the AFC Champions League round of 16.

A-League side Victory, making their first appearance in the last 16, took the lead through Besart Berisha inside the first five minutes at AAMI Park on Tuesday.

But Leonardo levelled in the first half with a fine curling effort from 20 yards to give the Koreans - winners of the Champions League in 2006 - a valuable away goal heading into the return leg.

A Salem Saleh brace and goals from Ahmed Al Yassi and Mahmoud Khamis inspired the hosts in Dubai.

Kota Mizunuma scored twice to give FC Tokyo a 2-1 first-leg win over Shanghai SIPG in Japan.

Mizunuma drilled in a deflected free-kick to cap the home side's dominance just before half-time, but Wu Lei equalised 10 minutes after the break for Sven-Goran Eriksson's men.

Tokyo regained their lead when Mizunuma volleyed in Yuhei Tokunaga's cross, and the home side held on to secure a lead to take back to China.

Elsewhere, El Jaish were 4-0 winners at Lekhwiya as two-time champions Al Hilal were held to a goalless draw by Lokomotiv.