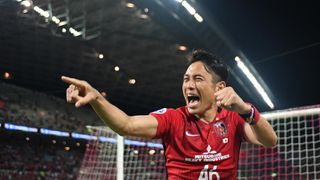 Urawa Reds pulled off a superb comeback to reach the quarter-finals of the AFC Champions League at the expense of Jeju United.

The Japanese outfit had lost the first leg 2-0 in Korea, but turned things around in the return at Saitama Stadium 2002, winning 3-2 on aggregate after extra time.

Urawa got off to a strong start and went 1-0 up in the 17th minute when Shinzo Koroki found the net with a header after some fine work from Yosuke Kashiwagi.

They immediately started pushing for more and Tadanari Lee levelled the aggregate scores at the half-hour mark, having already hit the upright minutes before.

Jeju's hopes of progressing were dealt a major blow when Cho Yong-Hyung received his marching orders with 10 minutes left on the clock and the home side made the most of their numerical advantage in extra time, Ryota Moriwaki netting the winner in the 114th minute.

The visitors then lost their cool in the time remaining and both Baek Dong-Gyu and Kweon Hang-Jin were dismissed for violent conduct.

Elsewhere, Shanghai SIPG beat Jiangsu Suning 3-2 to make it 5-3 on aggregate and book their ticket for the last eight.

Elkeson handed Shanghai the lead in the 34th minute, before an own goal from Yang Xiaotian put the visitors further clear.

Hong Jeong-ho pulled one back for Jiangsu after the break, before Wu Xi netted the equaliser well into stoppage time to spark hopes of a miraculous comeback.

However, Hulk then settled the tie just 50 seconds later after being set up by Oscar.