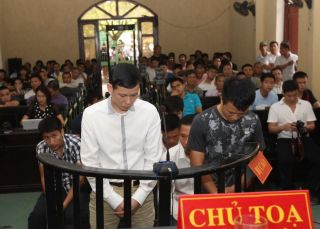 A Vietnamese court on Monday found a group of nine players – including eight from Ninh Binh – and a bookmaker guilty of fixing an AFC Cup game against Malaysian club Kelantan in March, according to state media.

The group of Ninh Binh players involved were given suspended sentences.

Ninh Binh withdrew themselves from domestic action after authorities began investigating, with fears arising that league matches could also have been rigged.

The Vietnamese side were allowed to keep their place in the AFC Cup, but they appear to be on the brink of elimination following a comfortable first-leg defeat at the hands of Hong Kong champions Kitchee.

Jose Molina's side picked up the impressive victory away from home and are overwhelming favourites to progress into the final four.

Molina, though, is still expecting his players to take their performance up a notch when Ninh Binh head to the Mong Kok Stadium on Tuesday.

The former Villarreal coach said: "We performed well in the last match, but we were not at our best.

"We are just at the start of our season, but we hope to continue winning as we did in the last match.

"They are a good team, and just like the last match, it will be difficult to win, but we will try our best to win."