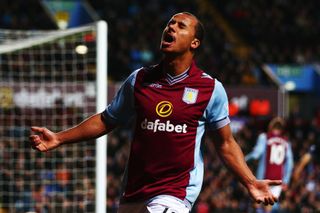 Villa have endured a six-match winless run in the league, with five of those ending in defeat, to leave Paul Lambert's men just three points clear of the relegation zone.

Saturday sees FA Cup finalists Hull visit Villa Park and Agbonlahor is adamant the whole squad will not shy away from the responsibility of ensuring top-flight survival.

Speaking to the club's official website, he said: "We're not going to hide away from it. Every player in the squad knows that it is a massive game.

"There is a lot of pressure on the game but we have got experienced players in there and hopefully everyone will rise to the occasion and get the result.

"It could be the biggest game of all of our careers so far because of what is at stake. To keep a club the size of Aston Villa in the Premier League is a massive thing.

"We know we've been up and down and inconsistent as a team but at this stage of the season you've just got to try and get the points on the board. Form goes out of the window now."

Agbonlahor - who has four goals in 28 Premier League appearances this season - also rubbished any suggestions that Hull may show signs of complacency with their final with Arsenal on the horizon.

He added: "We can't afford to think that because of the FA Cup they will be a less strong side.

"They are going to want to beat us when they come to Villa Park. We've got to treat it like a cup game and give 100 per cent."