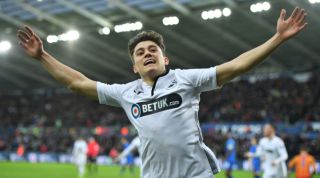 The two clubs were reported to have agreed a deal that would see the Swans receive £10 million through an initial loan fee of £1.5 million, the obligation to sign James for £7 million if promotion to the Premier League was achieved, and further instalments.

The Wales international passed a medical at Elland Road on Thursday before Swansea pulled out of the deal with around an hour remaining before the 11pm deadline passed.

“Swansea made no attempt to keep the player and at the first sign of money they couldn’t show him the door quickly enough,” James’s agent David Manasseh told The Telegraph.

“It is very disappointing but the player is philosophical about it.”

The newspaper believes that the U-turn came about as a result of a disagreement between Swansea chairman Huw Jenkins and the Championship club’s American owners, with the Swans having already loaned Tom Carroll to Aston Villa and Jefferson Montero to West Brom on deadline day.

The 21-year-old has scored two goals in 21 appearances for the Welsh side so far this season.