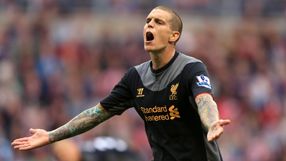 The Liverpool defender was stretchered off in the second half of the recent 2-1 defeat at the hands of fierce rivals Manchester United.

However, he returned to first-team action during the weekends 5-2 thumping of Norwich City having only suffered a minor fracture to his kneecap.

"I feared the worst when it happened," he told the Liverpool Echo.

"When I tried to get up the muscle in my knee just didn't work. I felt really unsteady and the medical staff thought I had done my ligaments.

"I thought it was a bad one and that I would be out for months. But, thankfully, it was just a really hard knock to the knee.

"I've got a small fracture in the bone but it's only a minor thing. It's not a problem. I only started training again last Friday but I was fine for the Norwich game.

"I felt really comfortable and I'm enjoying it. I think I deserved a bit of luck after the problems I've had in the past."