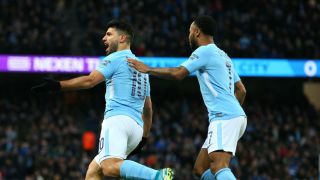 Aguero's relationship with Guardiola has been a source of intrigue throughout the Catalan's time in Manchester and City's all-time leading scorer was linked with a return to former club Atletico Madrid by reports in Spain this week.

The 29-year-old scored 30 goals in all competitions before a knee injury curtailed his campaign and, speaking ahead of Sunday's closing Premier League match at Southampton, Guardiola dismissed the notion of his leading striker bolstering an Atleti forward line widely expected to lose Barcelona target Antoine Griezmann.

"Last season it happened many times in this press conference and I said a thousand times - Sergio is going to stay until he decides 'my time here is over'.

"That is why I say it is not going to happen. But in football you never know."

England winger Sterling has enjoyed the most prolific season of his career, with 18 Premier League goals alongside a further 11 top-flight assists.

The 23-year-old has reportedly decided to delay talks over a new contract with City until after the World Cup.

"The club, the chairman and myself would like him to stay for a long, long time and sign a new contract," Guardiola said.

3 - Raheem Sterling has provided three assists in a single game in all competitions for the first time in his career for either club or country. Strings. April 29, 2018

"That is now not in my head because, like I said to your colleague, I go on holiday in two days.

"We want him to stay as long as possible."

Provided such stars stay in place, Guardiola does not envisage a busy close season in the transfer market following last year's successful overhaul.

"I said not too much [will change] but it depends on the players," he said. "Maybe some players who do not play more are unhappy and want to leave, I don't know.

"But not too many. We made a high investment last season because it was an old team – 10 or 11 players more than 31 years old. We needed to change it and we did it.

"Now we are going to change some details. Yaya [Toure] is leaving. One [signing] - maybe, maybe two."

Napoli midfielder Jorginho has been touted as a replacement for Etihad Stadium favourite Toure, while City are also understood to want an additional versatile forward, with Bayer Leverkusen winger Leon Bailey rumoured to be among the targets.