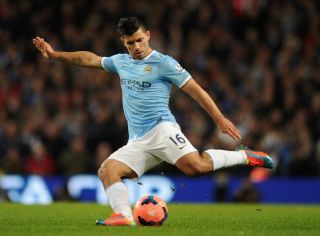 The Argentina international striker has been absent for the last four Premier League matches, after injuring his hamstring in the 2-1 UEFA Champions League defeat at Barcelona.

However, Aguero has returned to training this week and is nearing a return to competitive action.

While Saturday's encounter with Southampton at the Etihad Stadium will come too soon, manager Manuel Pellegrini is hopeful the 25-year-old can feature against Brendan Rodgers' men eight days later in a fixture that will have a huge bearing on the destination of the Premier League title.

"It is too soon for Sergio (against Southampton)," said Pellegrini. "He has trained for only two days and needs more time. Perhaps one week more and he will be prefect for the game against Liverpool.

"We hope he will return and play an important role in our remaining matches but this match has come too soon for him. He needs more work to become 100 per cent fit but he will be fine for next weekend."

Michah Richards does return to the squad against Southampton following a knee injury, but fellow defender Matija Nastasic (also knee) once more misses out.

Meanwhile, Pellegrini is expecting a tough test against Mauricio Pochettino's side, despite the fact Southampton have little to play for the remainder of the campaign.

He added: "Southampton are a very good team who are playing without pressure who are very comfortable in the table.

"They cannot be relegated and they can't qualify for Europe so they are playing with freedom and we are absolutely sure we will have a hard game on Saturday."