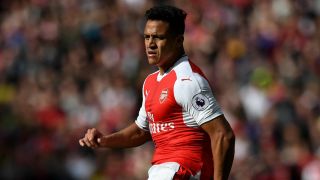 Manchester City boss Pep Guardiola cooled speculation linking him with a move for Arsenal forward Alexis Sanchez and reiterated his stance that Sergio Aguero will not be allowed to leave the Premier League club.

Sanchez has been a purported target for City and Guardiola, who took the Chile star to Barcelona in 2011, throughout the close season.

The 28-year-old told reporters in his homeland over the weekend of his desire to play in the Champions League – a competition that will feature City but not Arsenal next term – but Arsenal manager Arsene Wenger maintained this week that Sanchez would not be allowed to leave despite entering the final year of his contract.

Speaking ahead of City's International Champions Cup meeting with rivals Manchester United in Houston, Guardiola was in no mood to challenge the veteran Frenchman and suggested attacking reinforcements were not a priority with Aguero and Gabriel Jesus on the books at the Etihad Stadium.

"Alexis plays for Arsenal, so Arsene said that [Sanchez will stay]. He knows more than me," the Catalan said.

"We have two really good strikers in Sergio and Gabriel so, in those terms, we are good. It’s not about a striker.

"The problem was, last season, Gabriel was out for a long time and we would like to see both of them together."

Pressed on whether Aguero, who was reported to have attracted interest from Premier League champions Chelsea this week, remained central to his plans, Guardiola was unequivocal.

"You know my opinion about Sergio," he said. "I said many times last season and I have not changed a word of what I said.

"He is our player and he will remain here."

He was the penalty shoot-out hero in his country's Confederations Cup semi-final triumph over Portugal last month but is set to begin the season as second choice behind new recruit Ederson at City.

Nevertheless, Guardiola is keen for the 34-year-old former Barcelona man to compete with Ederson and dismissed suggestions City were in the market for experienced Napoli keeper Pepe Reina.

"No, no – we will go with Ederson, Claudio and the young players [goalkeepers]," Guardiola added.