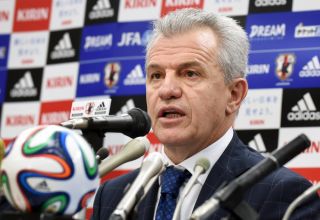 Japan were seen as one of the outsiders in Brazil but they failed to progress from their group, leading to Alberto Zaccheroni's departure.

Aguirre, who was appointed in July, is relishing the opportunity of rebuilding Japan heading into January's Asian Cup defence in Australia.

"We are starting a new stage," the Mexican boss told reporters on Thursday.

"We fancy to start this new project all together and I understand that from the first game we have to show an image of a strong team who is looking all the time to win games.

"It won't be easy from the beginning to play good football especially after just having a couple of training sessions but our objective in this first stage is to get ready, and also to know some new players and try to win the Asian Cup."

Fans and pundits will get a glimpse of the new Japanese team when they take on South American pair Uruguay and Venezuela in two international friendlies next month, with five debutants called upon.

"We found 11 players of the J-League in this short time and we are looking at them, and also we called a couple of them that were playing in Europe to try to form a good team," said Aguirre.

"For these games against Uruguay and Venezuela we want to show a strong team who plays good football and also who run on the pitch and we will try always to get the win.

"We will try to improve step by step."