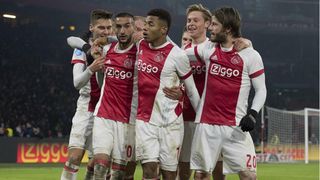 Ajax breathed new life into their Eredivisie title ambitions by defeating league leaders PSV 3-0 at the Amsterdam ArenA on Sunday.

A brilliant second-half display saw Ajax move seven points back from Phillip Cocu's side, whose 12-match unbeaten run came to an end after their advantage at the summit was cut to five points by AZ Alkmaar's 5-0 victory over Heracles on Saturday.

With snow forcing the postponement of Utrecht's clash with Feyenoord and Vitesse's trip to Sparta Rotterdam, the match in Amsterdam took place under a closed roof and with a delayed kick-off time due to the adverse conditions.

PSV lost Jurgen Locadia to a hamstring injury after just 12 minutes and they came under sustained pressure for prolonged periods in a fiery first half, Kasper Dolberg heading over the hosts' best opportunity shortly before half-time.

Ajax finally broke through when David Neres volleyed a half-cleared corner into the bottom-left corner in the 61st minute, and Lasse Schone quickly doubled their advantage with a fierce drive from 18 yards.

Derrick Luckassen forced Andre Onana into his first save of the match but Marcel Keizer's side were out of sight when Donny van de Beek snuck a pass from Neres in off the post.

Marco van Ginkel rattled the crossbar with a brilliant free-kick as the clock ran down, but PSV were left to rue missing out on a chance to move 13 points ahead of their fierce rivals.