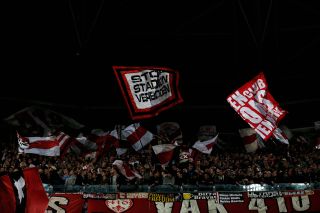 The Group H fixture at Parkhead was overshadowed by events in the stands, with the travelling supporters reportedly ripping out seats and throwing them following the hosts' opening goal.

A UEFA spokesman said on Wednesday: "Disciplinary proceedings have been opened against AFC Ajax for crowd disturbances and throwing of objects (article 16 of the UEFA Disciplinary Regulations) at last night's UEFA Champions League match in Glasgow against Celtic FC.

"The case will be dealt with by the UEFA Control and Disciplinary Body on 21 November."

Meanwhile, Police Scotland revealed that they too were investigating events at Celtic Park on Tuesday night.

"A full investigation is being carried out into the behaviour of a number of Dutch supporters," they tweeted.

"Our officers are reviewing CCTV images. Any info gleaned will be shared with our Dutch counterparts to identify those involved."

Around 3,000 Ajax fans travelled to Glasgow for the clash, with Celtic heading to Amsterdam for the return fixture on November 6.